Awesome LEGO ads that wake up your inner child

There are not many brands that have accomplished what Lego managed to do. This Danish toy manufacturer has become one of the biggest brands that the planet has seen.

Not only it got big, but we saw Lego ads even in games and movies. They did their films. This is why they need to be considered as some of the most recognizable brands in the world. Lego managed to do this effortlessly by touching both children and adults.

Lego creativity is not only limited to building amazing structures; it is also about their advertising. Lego ads have been some of the most fun to watch campaigns launched in recent years.

Their strategy has kept them alive in the 21st century, and this is because they changed how they adapted to the changing consumer relationship. In the history of Lego, the company has adopted in big times to the changing consumer relationship. Lego’s history is connected with its marketing efforts. They managed to create engaging pages on its website, together with games and marketplaces.

Communication was focused on both adult fans and young kids, and this is one of the reasons it was so successful. Let’s see some Lego ads that had a significant impact.

One of the brilliant Lego ads that we found is this one. We see a rabbit that is being chased in the city by a scary hunter. He takes advantage of the town and changes all kinds of stuff. The rest of the people are continually making a lot of changes, as well.

So besides the original part, we also need to appreciate the hard work that was put in all the steps.

This was a big step, announcing the Lego movie. It was a big part of the marketing plan for Lego. It became the first film of that year that made $400 million globally.

Usually, if you have a look at the Instagram posts that Lego has, it gets around 10,000 likes. After the movie came out, that number changed to 20,000 likes per post. So we can consider that the film also brought more attention to their social channels as well. 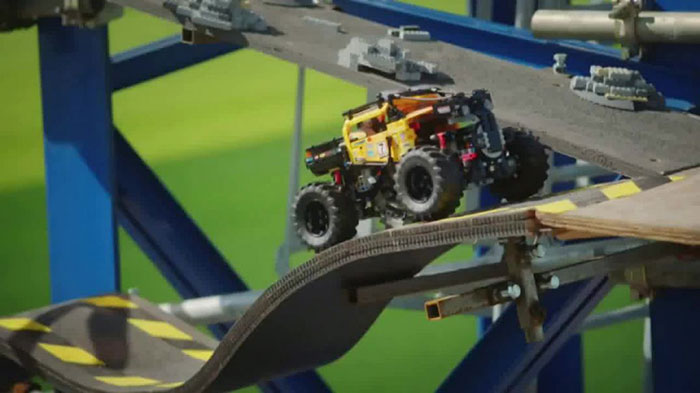 Lego advertisement also focuses on the things you can build with them. In this one, the vehicle gets put together, and a drone takes it at the top of an obstacle course. Kids can guide the car using the technic control+ app. 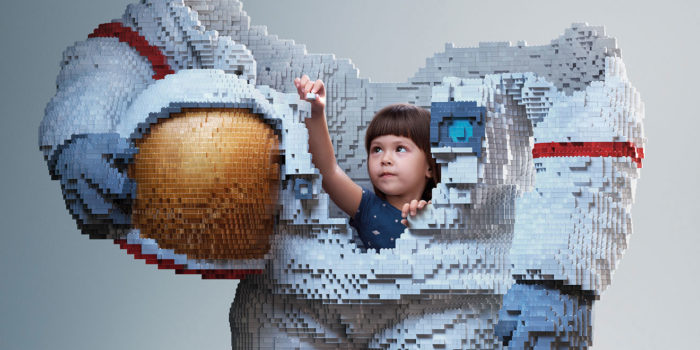 Lego is known for making some of the best advertising. This series of print ads did a great job. From concept to execution, everything was done in the right way.

Lego’s ultimate purpose is to inspire and develop children to think creatively. They believe that play is a crucial element in children’s growth and development. This helps them become healthy teenagers and adults.

Lego ads also have original stories to showcase. In this one, six heroes crashed from the sky and need to get their masks of power. Discover the legend of Bionicles and find out if they can defeat the evil that is closing.

Legoland “Get ready for fun” by BMB 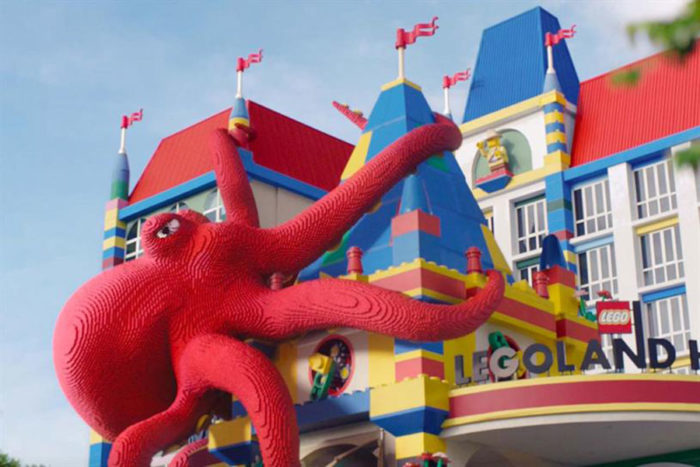 Legoland’s new campaign pitches the group of amusement parks as being the right place for kids to let their imagination run wild. They created different Gigantic lego creatures like a dinosaur and octopus by just using lego pieces. 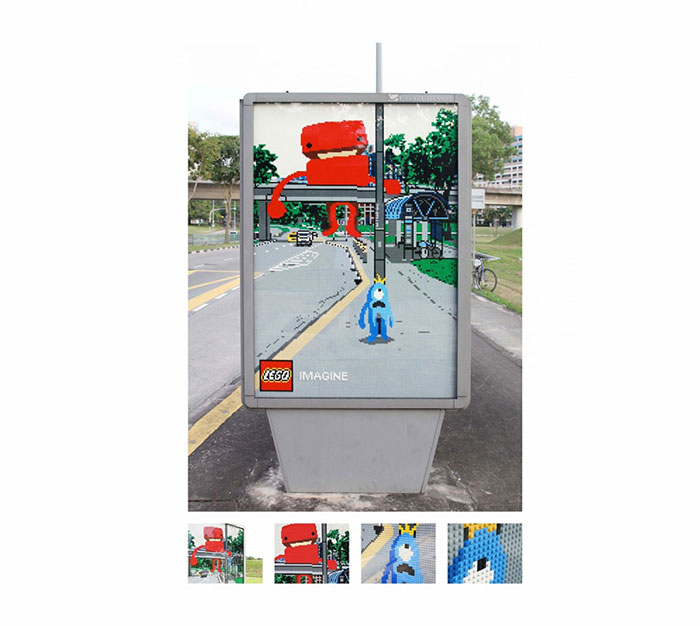 Lego has always had a fun approach to its marketing efforts. In these amusing lego advertisements, we can see how unique lego art blends with the surroundings.

The certified lego artist Nicholas Foo created with his team the design of three separate bus stops. They used a whale, monster, and caterpillar characters to build them. We think they did a cool job, and the final layout looks great.

This was the first time people stepped on legos without hurting their legs. Lego ads that are funny always got more attention, and this one is a good example.

For this Lego ad, Sven Robin Kahl the LEGO Senior designer, offers you an exciting behind the scenes look of how the Marvel Guardians. Do you like what they managed to create? 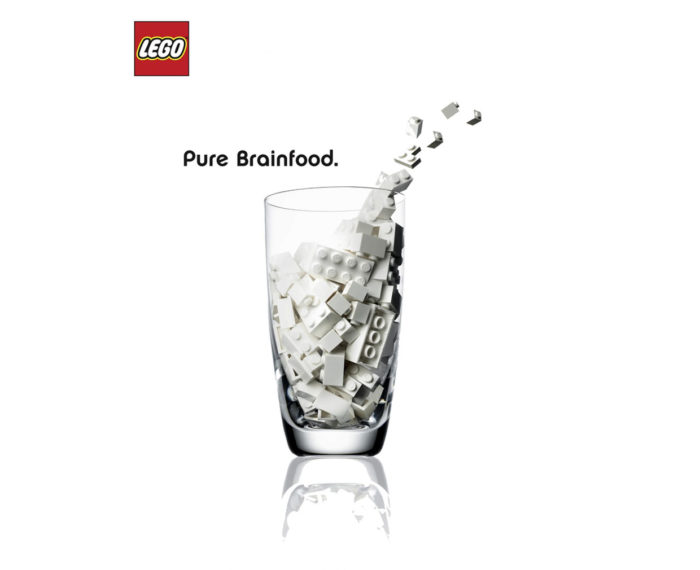 Have your glass of Lego; it is perfect for your brain. The message is a bit less visible compared with other Lego ads, but it still is active.

It is entirely known that stepping on a LEGO brick might hurt a lot. Taking advantage of this fact, Social, a digital advertising agency, build a lego advertising campaign named “Building Memories.” In it, the life of a parent is shown as it can be painful sometimes to be one. But in the end, it is always worth it. 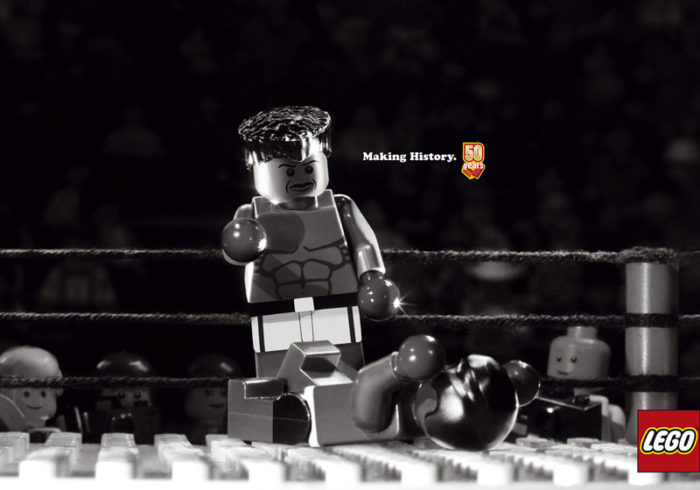 This was part of a series of ads that re-created famous historical photos using Legos. It is mighty, and it was a real success. 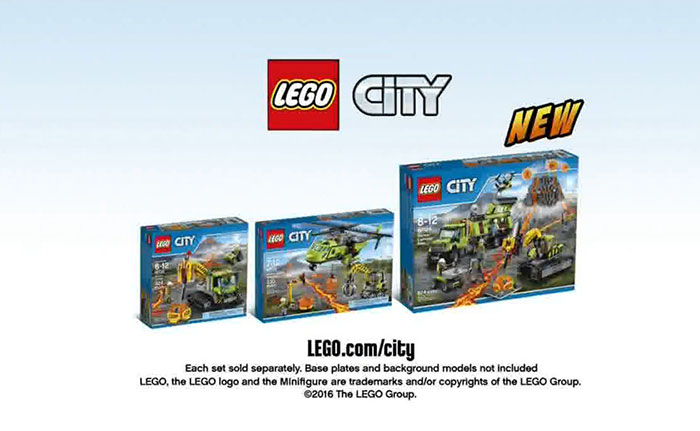 Kids like a lot to play different roles and Lego ads focus many times on this aspect. Here they do their first mission by creating a Volcano Helicopter to rescue explorers from the rising lava.

This was a tribute to the imagination of playing with Lego. It is the best illustration of how Legos work and is a good explanation of the brand’s success. It shows a minimalist design by Blattner Brunner.

The next lego ad relates to Christmas as a full town that was created for that day. A foot interrupts the activity, and we see Santa leaving his home. As Christmas is around the corner, Santa relies on one of his friends and some creativity with Lego bricks. He needs to build a solution to reach home in time for Christmas.

The film is part of a Lego ads campaign that includes TV, Digital, Print, all mediums of exposure.

Ending thoughts on these Lego ads

In conclusion, Lego ads show the success story of this brand that doesn’t stop surprising the world with its creativity. Check the ones above and see which ones are your favorite.

If you enjoyed reading this article about Lego ads, you should read these as well:

The post Awesome LEGO ads that wake up your inner child appeared first on Design your way.