Creative WWF ads that will surprise you with their message

It is one of the largest organizations overall, with more than 5 million supporters from all over the globe and it operates in more than 90 countries. WWF strives to conserve nature from destruction and it wants to make the world a better place to live. In this article, we will take a look at the best WWF ads that are creative.

To raise awareness and responsibility among the human population, the organization has created a number of very interesting and creative WWF ads that try to convey the right message to the viewers. These adverts contain some very engaging and thought-provoking ideas and comments that tend to shock the viewer.

You have probably already seen some of these ads. If you enjoyed them and liked them, then you will no doubt enjoy this list of the most creative WWF ads that have ever been created. Some of these have a very surprising message to go with it. 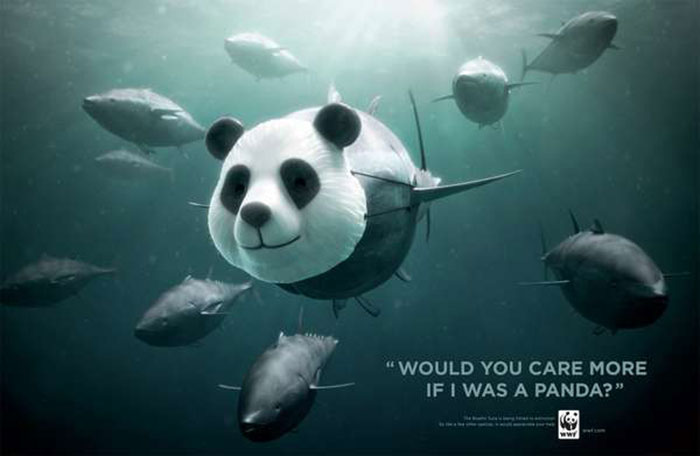 This is a very creative and interesting campaign by WWF which strives to decrease the overfishing of the Bluefin tunas in the Mediterranean Sea. These fish are known as the fish that are used for making sushi. This WWF ad will no doubt hit all of the sushi lovers out there, but also people who care about animals and nature preservation.

These WWF ads feature Bluefin tunas in them, with their heads replaced by the heads of pandas and rhinos. They try to convey the message that these fish are just as vulnerable as the other animals. The advert tries to convince businesses and people not to buy or sell these fish until the population of these fish is sustainable and until there is a plan to do so. 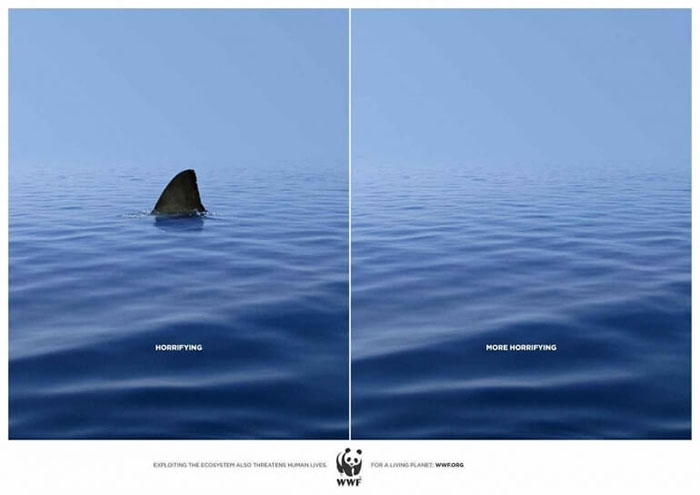 This WWF ad is another one of the brilliant WWF ads that the organization has come up with. It shows the fin of the shark in one picture, and in the other one, it is gone, which tries to represent the feeling of solitude and extinction. It provides a dark scenario where there is nothing left; do we really want that to happen? It gives us something to think about.

Endangered Species With a Graffiti 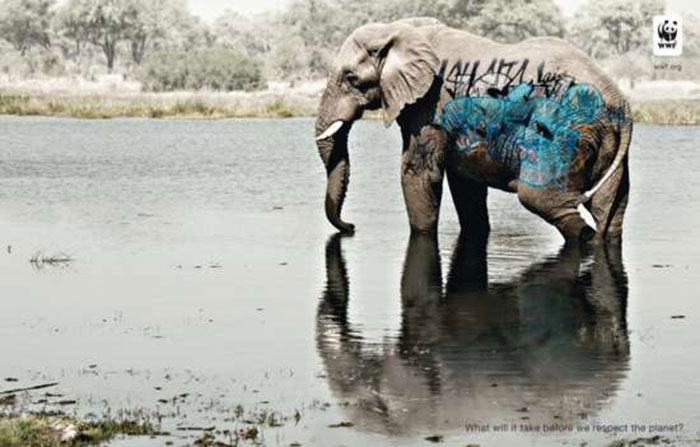 Graffiti is sometimes seen as a work of art by many people; in this WWF ad, however, they are used to portray a more negative nature of the graffiti – one of defacement. 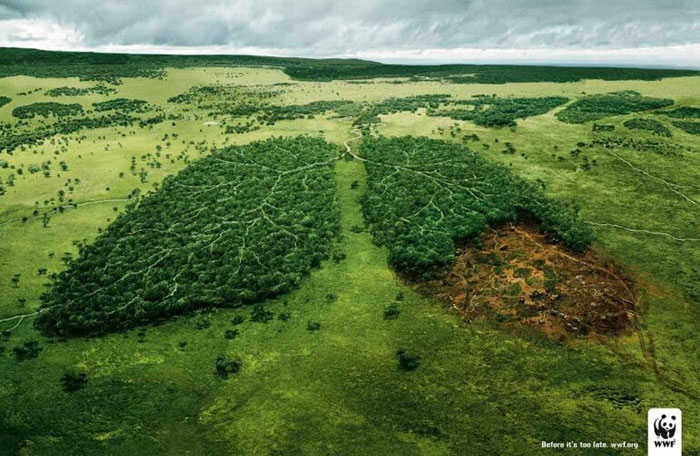 WWF ads not only fight for animal rights, but also for nature preservation. And this ad tries to portray forests as the lungs of the planet; the message of the ad is to act as quickly as possible before it is too late; before we lose the lungs. It reminds me of the anti-smoking adverts in some ways. 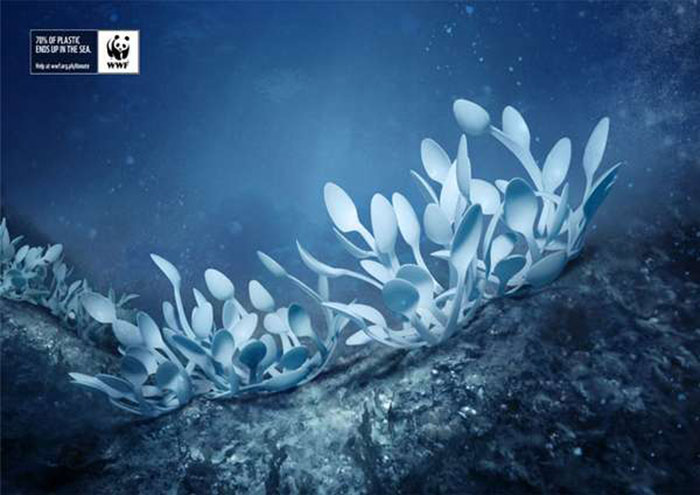 Another very recent issue that is heavily discussed nowadays is the problem of dumping plastic into the seas. In this case, the advert shows a very interesting portrayal of sea life and plants being replaced by plastic forks and spoons.

This WWF ad was made by the Philippine-based advertising company BBDO Guerrero; it is a big problem not only in the Phillippines but also all across the world. In this country, more than 70% of the waste plastic ends up in the Phillippine Sea, which is obviously a massive problem for sea life that the WWF tries to address with this ad. 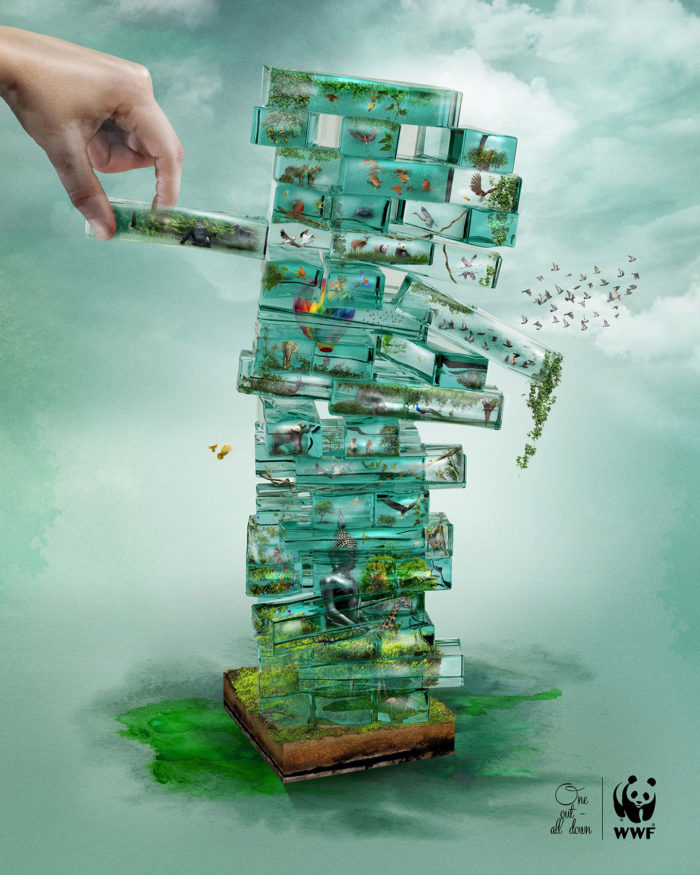 In this WWF ad, the WWF tries to use an analogy to portray the sense of balance in nature; it is like playing a game of Jenga; when you remove a certain aspect of the stability in nature, the whole ecosystem crashes.

We Are All Connected

This video campaign was made to show that all life and nature are connected and intertwined – us, humans are connected with animals in certain ways, and we are all tied together in one ecosystem.

It is one of the most brilliant WWF ads, which uses rope material to portray animals and human silhouettes which connects them together into one; it is a very elegant way of showing and giving this point, and definitely hits the spot well.

Save Paper – Save Forests 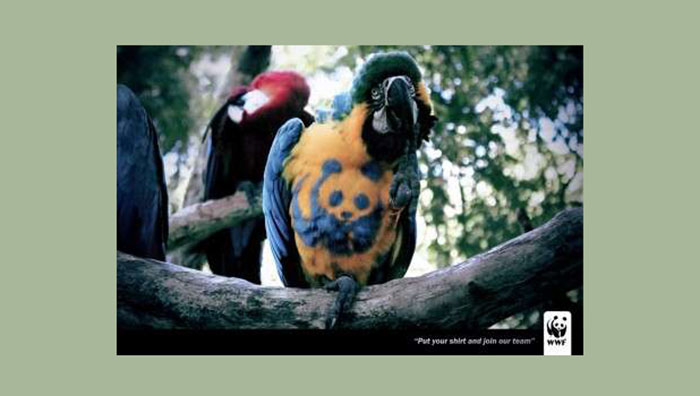 This 2012 campaign by WWF tries to encourage people to join the team. It features a very cool picture of a parrot that has very interesting colors and a panda painted on its belly. It is not only an endearing image that will no doubt make some people soft, but it also hits the spot when in terms of portraying what WWF is all about – preserving and protecting endangered species and nature. It also features a call to action slogan, which reads “Put on your shirt and join our team”. 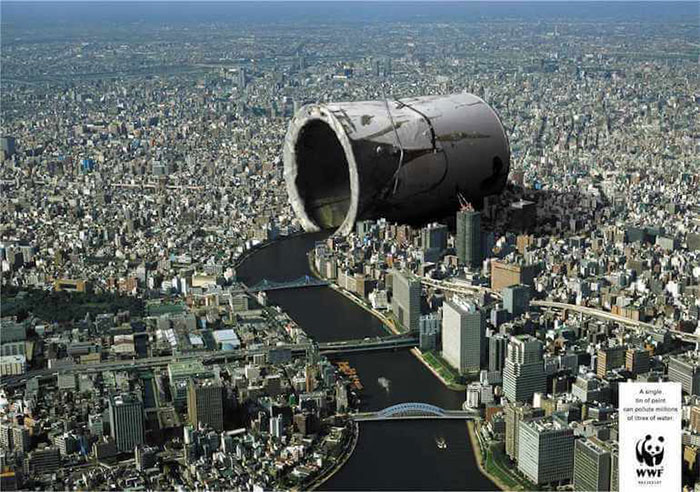 Sometimes people are really careless about what they chuck into the river. Often, rivers are full of waste material that comes from various industrial plants, sewers, and dirt. The scarcity of water is becoming a bigger problem every year, and nowadays only 3% of the water on Earth is actually drinkable. It has a quote written under the image, which says “A single tin of paint can pollute millions of liters of water!”. 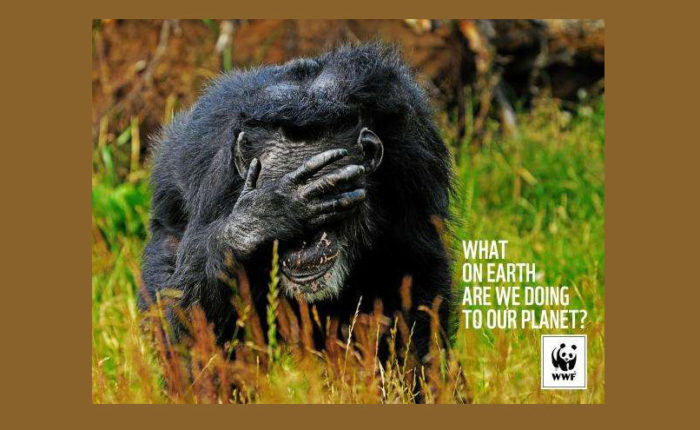 Another WWF ad that features a very cute, but also quite a depressing picture; it features a monkey with its face in its palm and it kind of mocks people for ruining the nature for everyone. This campaign was launched in Copenhagen, and it asks the question that every environmental preservation enthusiast asks: “What on Earth are we doing to our planet?”. 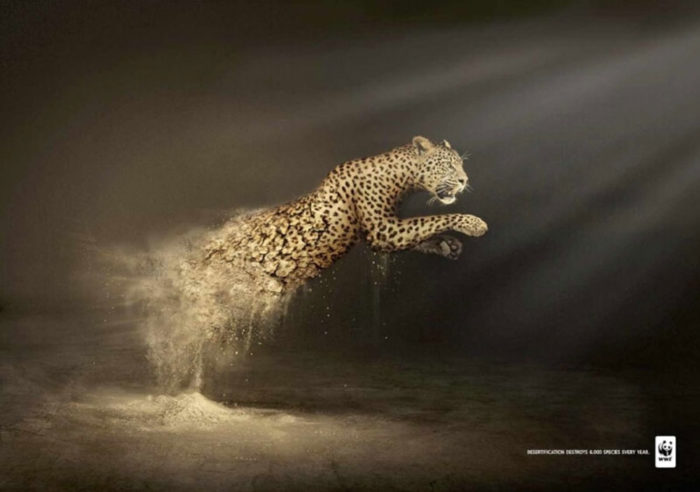 Another issue that is becoming more and more evident is the desertification due to global warming. This WWF ad portrays a nice picture of a leopard slowly turning into dust. It gives a very effective message that desertification destroys more than 6000 species every year. 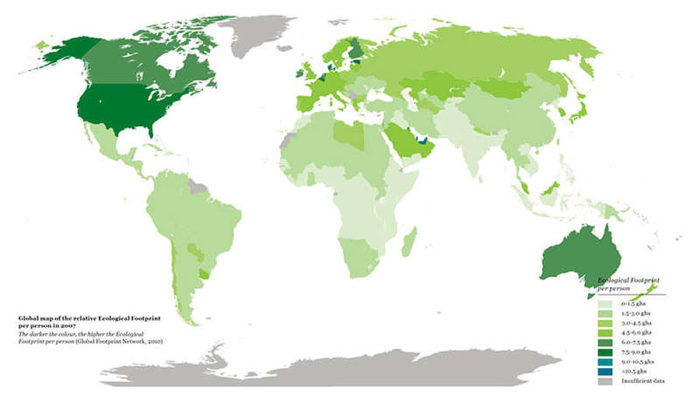 This ad addresses the issue of vanishing forests; the cutters are resting under the shade of the last tree in the picture, which is kind of ironical.

If you enjoyed reading this article about WWF ads, you should read these as well:

The post Creative WWF ads that will surprise you with their message appeared first on Design your way.