The Barcelona logo history and what the symbol means

When we talk about football, we can’t stop mentioning one of the best clubs in the world. FC Barcelona is one of the most productive and recognized organizations when it comes to sports. The number of fans around the world is worth admiring, and everyone defends the Barcelona logo with their hearts.

For a fan who has been admiring them for a while, the story of its creation may not be anything new, but if we are starting to know the Barça, we need to review it. This Spanish club was founded on November 29, 1899. It all began a few days before when Hans Gamper published in a newspaper his intention to form a football club.

At the time, 11 people responded to the invitation, being enough to create the FC Ball. Over time, the fame of the club was consolidated and elements that represented their culture and beliefs were added. An example is the motto “More than a club”, which transcends by meaning that Barcelona has a strong influence in different fields, not only in sports.

Let’s see what the FCB logo symbolizes, and how that has served to become a benchmark for Catalans.

Symbology in the Barça logo 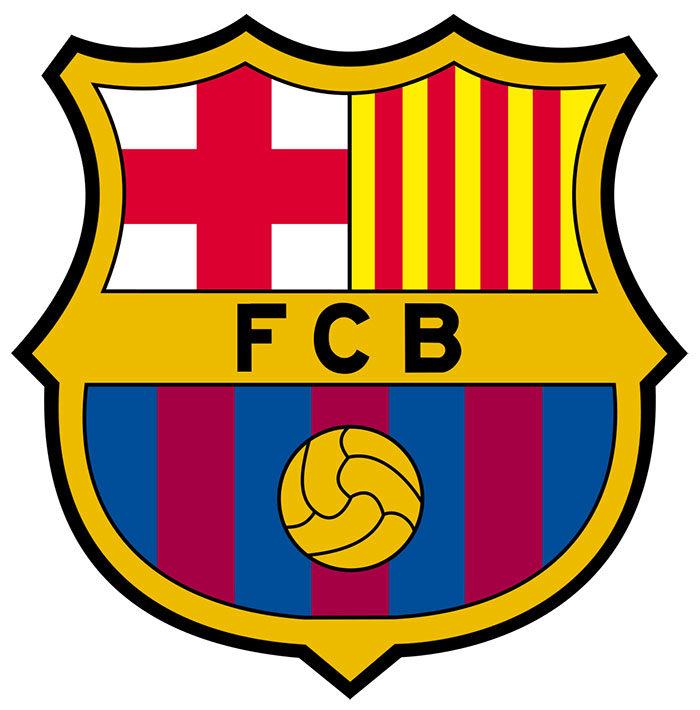 The current crest that represents the club dates from 1910. Its choice was through a competition, and its design remains faithful since then, only applying slight touch-ups over time.

The upper part has a strong connection with its origin since it has the St. George’s Cross. In this way, Catalonia is represented with its patron, and the city of Barcelona, ​​since the cross is also part of the city’s flag.

On the other hand, the lower quarters are more recognizable in the world of football, since they have a ball and the characteristic colors that give life to the club. The ball is essential for what it represents at the sports level.

Finally, after several aesthetic changes, we arrived at the current Barcelona logo. This is relatively new, being its last modification made in 2002 by Claret Serrahima. Let’s analyze each part of it in more detail.

– The font: The letter used is called Interstate Bold. Its Sans Serif style makes it easy to read, as well as being very customizable. Authorship is recognized to Tobias Frere -Jones, who presented the font with Font Bureau.

– The colors: first came the flannel, and then the shield adopted its style. The lower part is covered in stripes of blue and red colors, which come from the first uniform worn by FC athletes. In Catalonia, this combination is known as “Blaugrana”, so many times the club is referred to by this name.

The origins of the colors are not entirely clear. Many people believe that they are adopted from FC Zurich created by Gamper, while others indicate that it is a tribute to two of Barça’s first players, Arthur, and Ernest Witty since those were the colors of the school where they studied (Merchant Taylors). 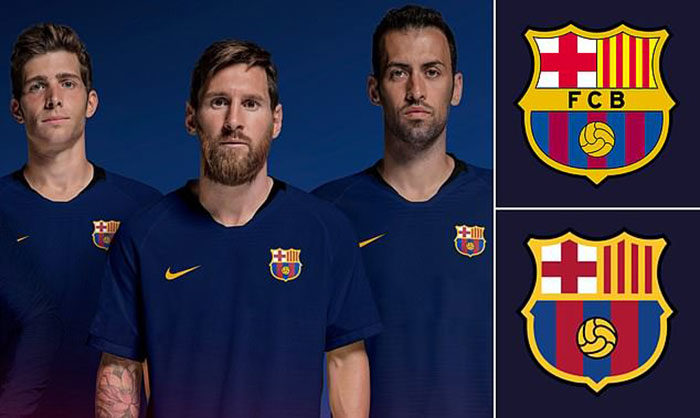 – Left upper quarter: as we mentioned previously, as part of the Catalan culture, the St. George’s Cross has been added, to honor its patron.

– Upper right quarter: FC Barcelona logo continues with the tributes to its Catalan origin. This time it is La Senyera, the red stripe flag on a gold background. Legend has it that King Wilfred the Hairy designed it in the ninth century to be used on the battlefield.

– Center: the passion they feel for football at FC Barcelona is undeniable. The central logo is the representation of a soccer ball, while the upper crest is in honor of its sporting facet.

The logo development to the present

The club has frequently updated its logo, but the essence remains virtually intact. It is curious that in its beginnings, they did not have their own identity, and for at least 11 years, they simply limited themselves to using the coat of arms of the city of Barcelona.

Colors are an example of what has been maintained over time, although its location has changed. The flannel of the selection already used the bars in blue and red, but the shorts were white.

At first, to make themselves known to the rest of the world, the Barcelona FC logo used several traditional elements of the city and had a style more adapted to the time. The shape of the emblem was in diamond, and it was divided into 4 sections. Outside, the emblem was surrounded by a laurel branch and a palm branch, and at the top of the diamond, a palm crown with a bat gave it the final touch.

Since then we could find St. George’s Cross and La Senyera. We already reviewed the meaning of these symbols, so let’s talk about those that no longer exist. The laurel represented peace, while the palm was friendship. On the other hand, the bat and the crown, however strange they may seem, are traditional symbols of the counts of Barcelona.

This first version of the emblem lasted until 1910, where it was decided to change the logo after a crisis in 1908.

The founder, Joan Gamper, managed to save the club from a crisis that almost leads them to close. To commemorate this, it was decided to create a new logo that symbolized what they were aspiring to be as a club.

The way to make it as authentic as possible was through a competition. The board of directors of FC Barcelona organized an internal competition for the different members to apply for a logo design. Who would say that the medical student and amateur artist CarlesComamala, would be the winner of the contest? Of course, he also had a brilliant career as a Barcelona player between 1903 and 1912, but his legacy would last for the next decades.

Originally, the design retained the colors blue and red, the St. George’s Cross and La Senyera. The form was maintained, and some tweaks were simply applied in 1920 and 1936 to modernize it.

The changes motivated by Franco’s dictatorship

Franco’s times were not good in general for Spain. With him taking the power in 1939, a set of rules that limited foreign contact in the country were implemented, such as that no name could include words in a language other than Spanish. Additionally, the dictatorship tried to eliminate all traces of Catalan culture, so their symbols and words were banned.

These dictatorial laws caused the club to have to change virtually the entire logo. First, it stopped being called Football Club Barcelona to be Club de Fútbol Barcelona, ​​which changed the acronym of FCB to CFB. 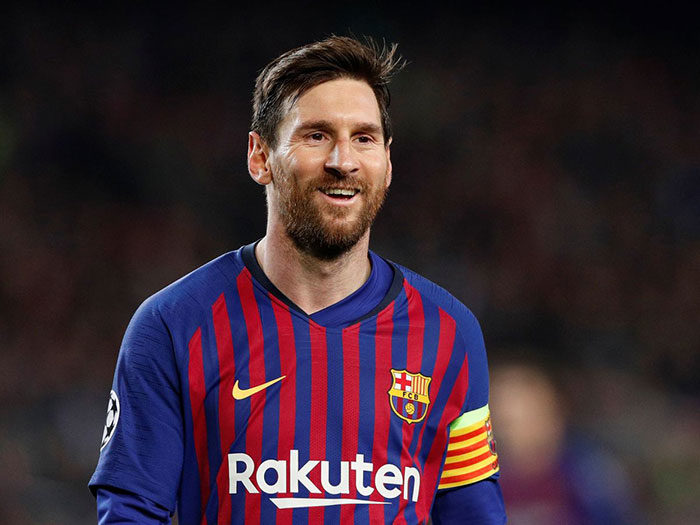 The Senyera was replaced by the national flag of Spain, which has the same colors, but the orientation of the stripes is horizontal.

It was not until 1949 that the club was able to use the four vertical bars again, in the middle of a political environment that was calmer (and of course, for the 50th anniversary of its foundation).

Returned to Barcelona logo after Franco 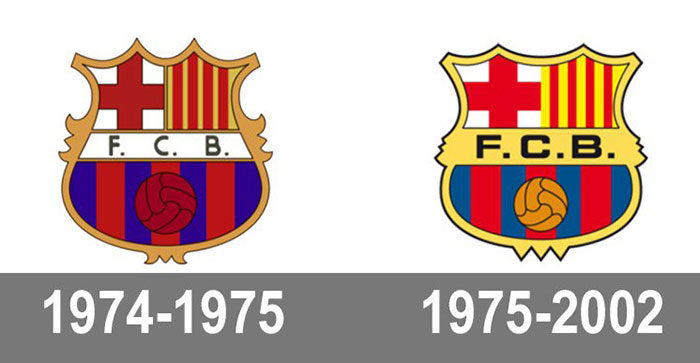 With the fall of Franco, the club was finally able to adopt its precious emblem back in 1974. This, in effect, was the design inspired by the original 1910, but with a couple of changes in the crest. Other minor changes were made in 1975 and 1982. Finally, it would remain this way until 2002.

The modern passion for the Barcelona logo 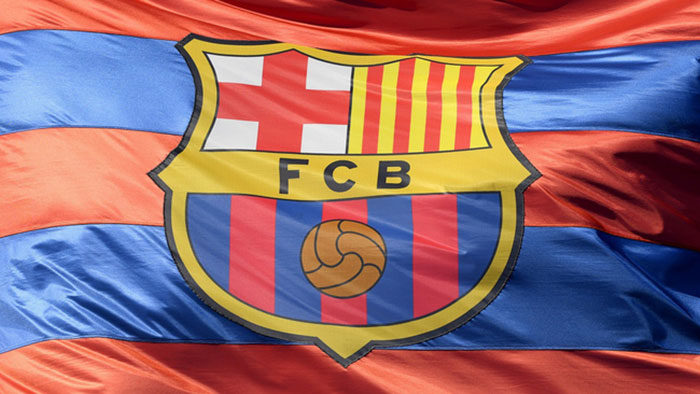 Finally, we reach the modern era of FC Barcelona. The logo goes through the latest changes to date by the hand of designer Claret Serrahima. To give it an attractive appearance for the new millennium, the lines were retouched so that they were cleaner and softer, a couple of elements that overloaded the design (points between the letters) were removed, more emphasis was placed on the graphic part by reducing the font size, and pointed corners were greatly reduced.

This change was necessary to be able to adapt to the new formats that were emerging with the digital era since it allowed it to be easily edited without losing quality.

And this has been a bit of the history of the changes to one of the most recognized logos in the world. The past of the club is much more extensive (It is not for less, with more than a century since its foundation), but all that has forged one of the most powerful clubs today.

Barcelona logo is nothing more than the visual expression of what they wanted to achieve, and that little by little it would become reality, bringing the name of its origins to the top.

If you enjoyed reading this article about the Barcelona logo, you should read these as well:

The post The Barcelona logo history and what the symbol means appeared first on Design your way.